This article is the first installment of a new metallurgical series in Engineer’s Dialogue.

Metallurgical failures can be extremely costly, resulting in replacement costs, down time, and in the worst case, injury or loss of life. Thus, preventing as many of these failures as possible is of significant interest and importance to industry. As with any engineering problem, the first step in preventing an occurrence is to understand what causes that occurrence. To facilitate this understanding, KnightHawk Materials Lab (KML) has analyzed hundreds of metallurgical failures spanning 10 years of history from all of our customers (primarily oil and gas and petrochemical industries) and categorized the causes of the metallurgical failures to provide insight into the most common failure modes in industry. What follows is a list, in order, of the most prominent failure modes that we have seen at KML, along with a brief description of the failure mode or cause of failure. Be sure to subscribe, as we take a deeper look into each failure metallurgists face in industry—Coming Soon.

Fatigue is the term used to refer to failures that occur under conditions of dynamic loading where the maximum stresses are lower than the tensile strength of the material, and fatigue failures are estimated to account for approximately 90% of the service failures due to mechanical causes. An example of a fatigue fracture is shown in Figure 1. In layman’s terms, these are failures that occur due to repetitive loading, such as from vibration, pressure pulsation, rotation, etc. Fatigue failures account for the largest percentage of failures seen by KML because of the nature of fatigue. It is relatively straight forward to design for yield and tensile strength, but fatigue loading can cause failures at stress levels far below yield, and things like unexpected vibration or minor materials defects can result in fatigue crack initiation and eventual failure. 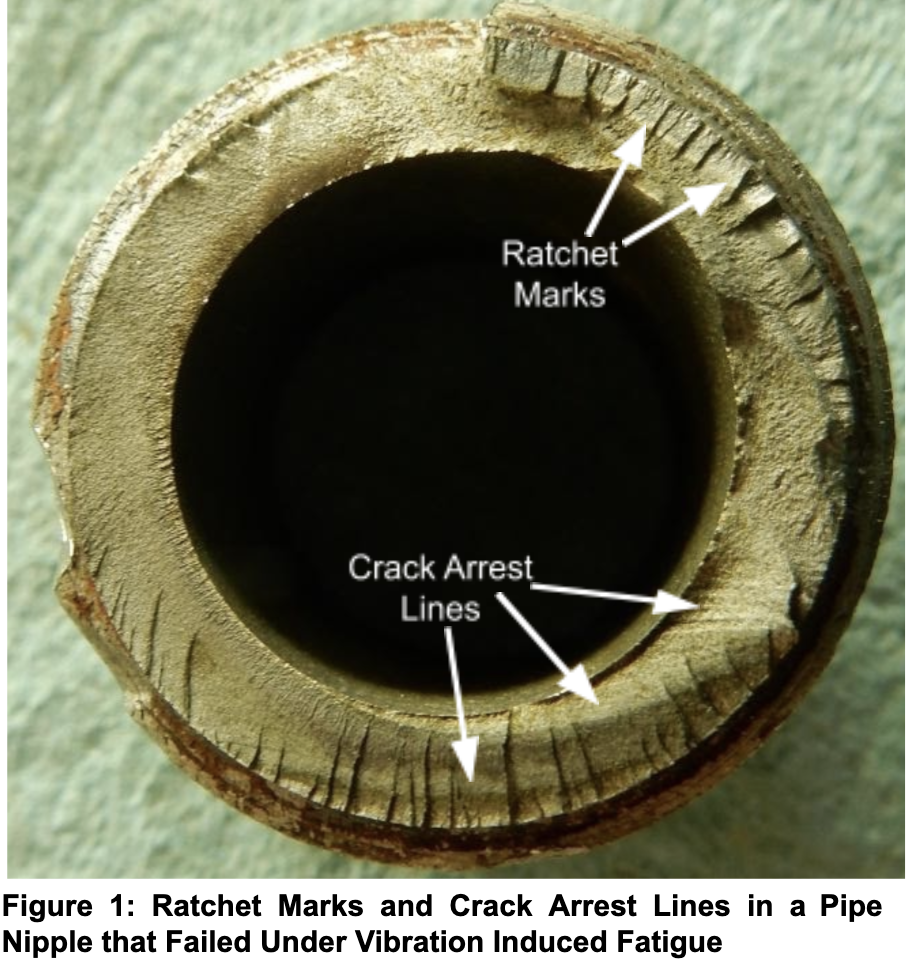 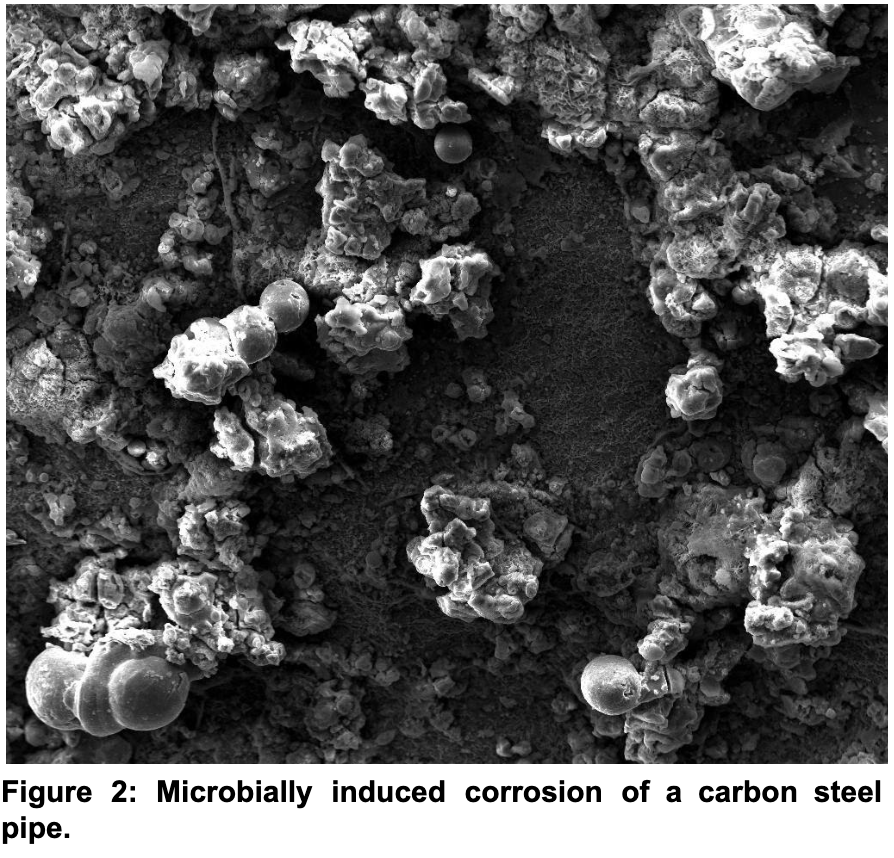 Corrosion, the breakdown of materials through chemical reactions, is estimated to cost the U.S. economy over $1 trillion annually, of which over $50 billion is estimated to directly impact the oil, gas, and petrochemical industries. Unlike Environmentally Assisted Cracking, the only thing that needs to be present for corrosion to occur is a corrosive environment, which explains the prevalence of corrosion failures on a national scale. The common nature of corrosion, combined with the high occurrence of corrosive environments found in the oil, gas, and petrochemical industries makes it unsurprising that corrosion is the second most common failure mode observed at KML.

Environmentally assisted cracking (EAC) is the failure of a material, generally at stresses significantly lower than the tensile or even the yield strength of the material, due to interaction with the environment, generally in the form of corrosive elements, in which case the cracking is referred to as stress corrosion cracking (SCC, an example of which is shown in Figure 2), or hydrogen, in which case the cracking is referred to as hydrogen embrittlement (HE). For EAC to occur, three things have to be present: First, you need an environment that is conducive to EAC (corrosive or containing hydrogen). Second, you need a material that is susceptible to the environment, and third, you need a source of stress. In the absence of any of these three components, EAC will not occur. However, due to the prevalence of corrosive and hydrogen containing environments in the oil, gas, and petrochemical industries, EAC remains one of the most common failure modes observed by KML. 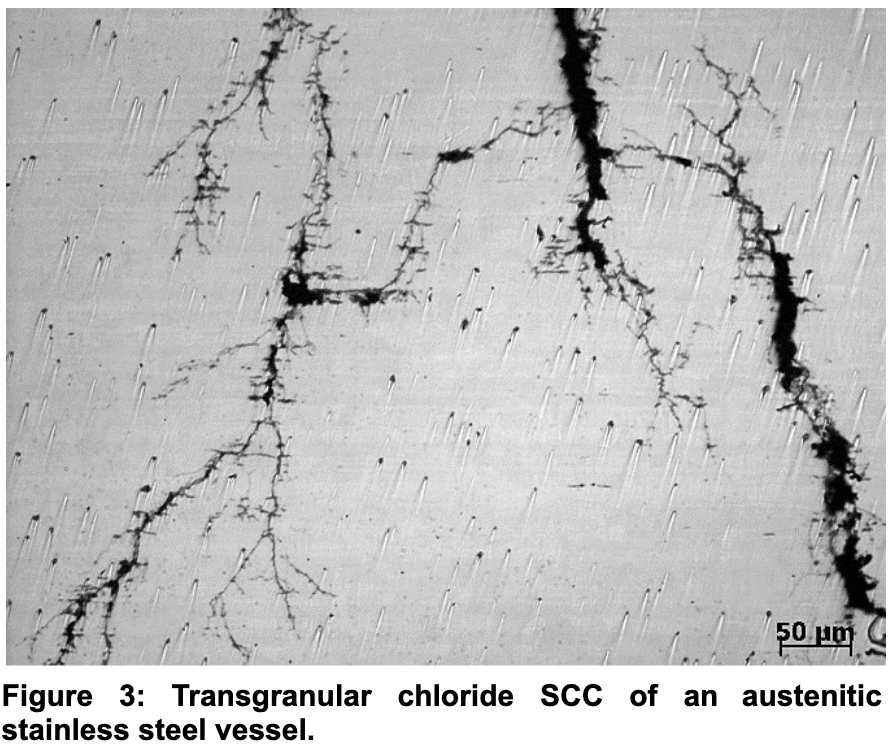 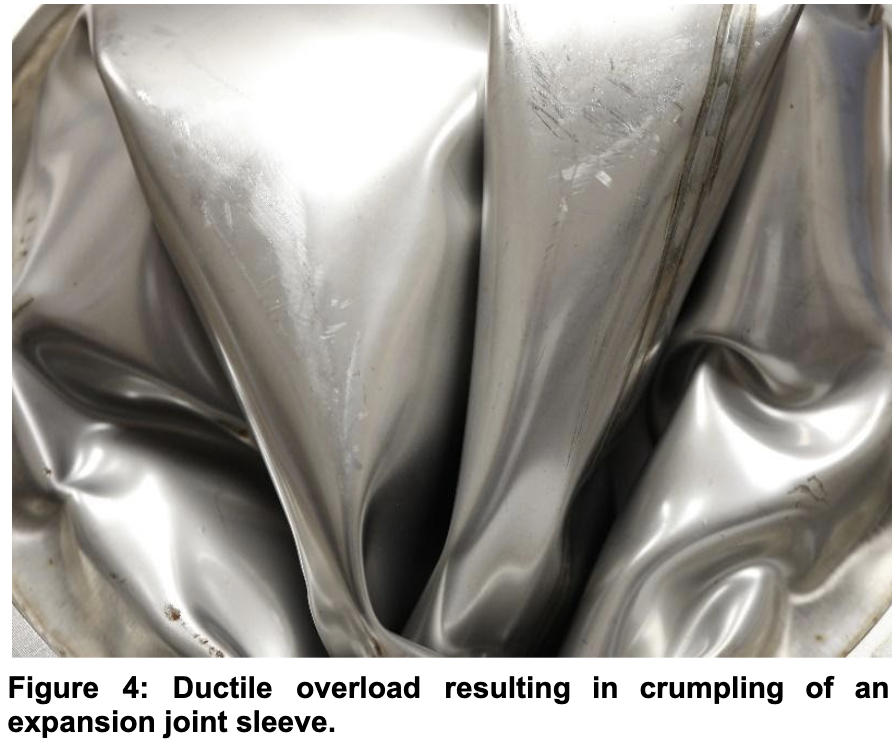 Overload is a failure of a part due to a single traumatic event that causes some part of the material to exceed its yield (as shown in Figure 3), or even tensile strength. Overload failures can be some of the most dramatic failures observed, resulting in catastrophic damage. Additionally, many failures that are not directly caused by a single overload event will still end with a final overload failure, e.g. the final overload of a fatigued part. Overload generally takes two forms, ductile and brittle. While the majority of overload failures occur on a relatively short time scale, ductile overload will tend to occur more slowly than brittle overloads.

Material defects are interesting because they do not represent a failure mode, but they are a cause of failure. Material defect related failures are things such as manufacturing defects, out of specification materials, welding defects (such as the weld HAZ cracking shown in Figure 4), use of the wrong material, etc. 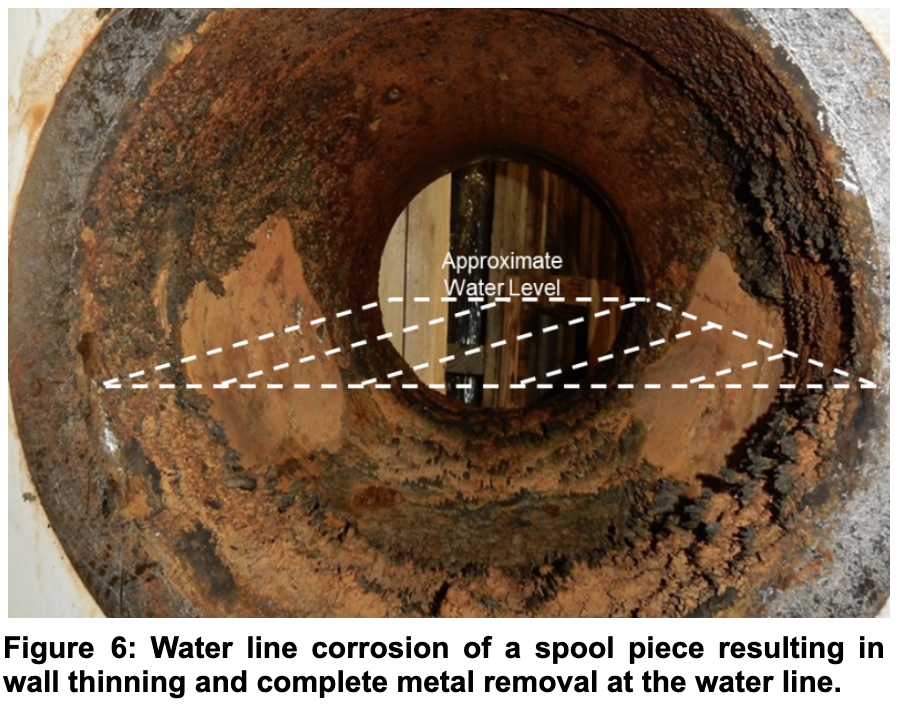 Any time two materials are in contact, there are frictional forces between those materials. When the materials are both solid and the frictional forces cause damage, it is termed “wear”, whereas when one of the materials is liquid or gas, it is called “erosion”. When erosion occurs in a corrosive environment, there is a possibility for the erosion and corrosion to mutually accelerate each other, leading to a rapid failure mechanism known as erosion corrosion.

This category covers failures that are due to improper installation of parts, lack of or contaminated lubrication, etc. These failures are hard to predict as they are inherently human in nature. 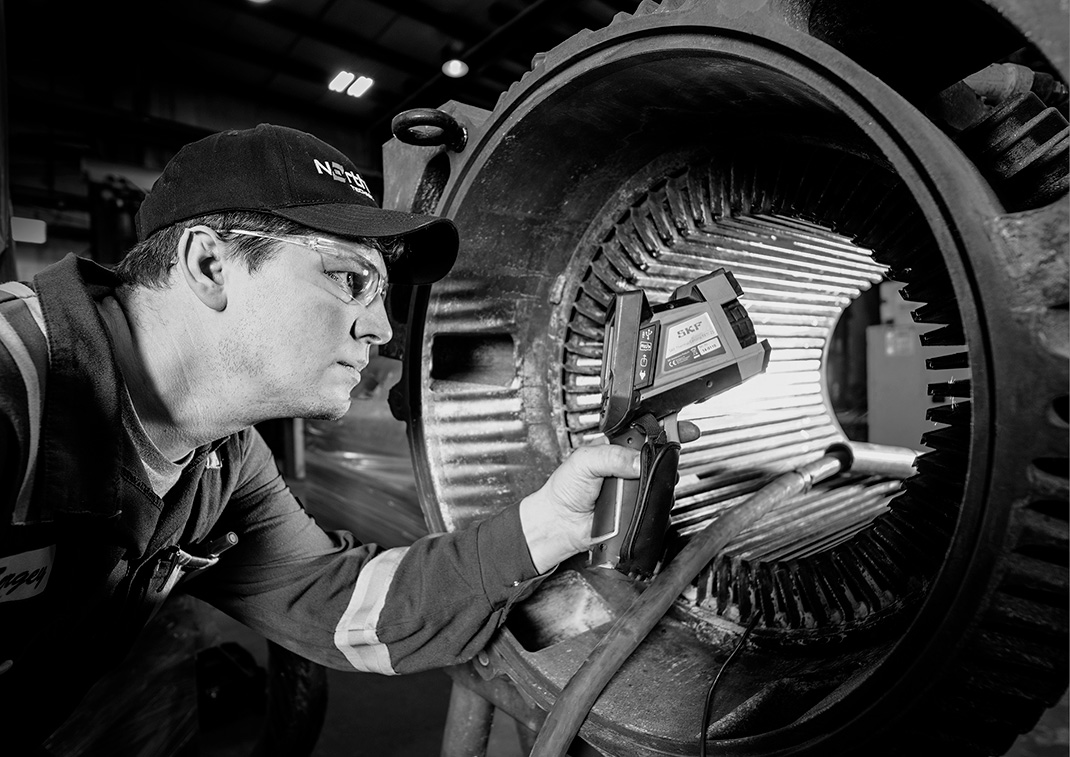 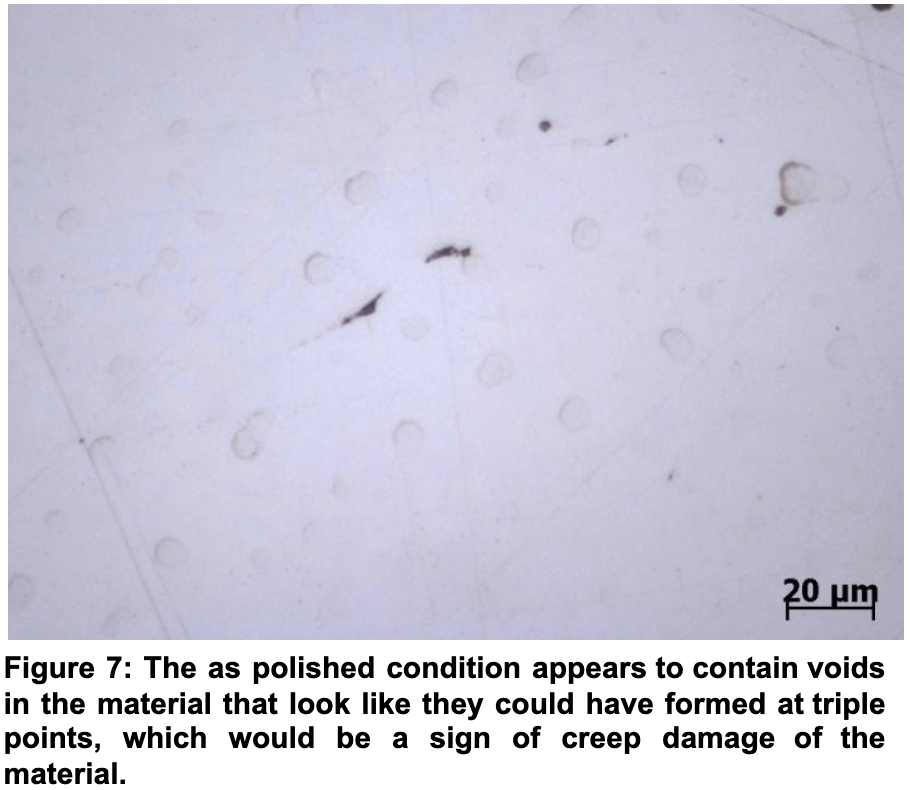 Overheating materials can cause deformation, micro-structural changes, fracture, thermal fatigue, and other problems in a material that can lead to immediate or delayed failure. Additionally, consistent operation at elevated temperature (exact temperatures are material dependent) can lead to creep (material deformation under constant stress below the materials yield strength). Creep can cause damage to accumulate in a material and eventually lead to failure.

A meticulous reader may have noticed that the percentages presented in this article do not sum to 100; indeed, they sum to 107%, and there are some very rare failure modes (e.g. cyclic hardening) that have been seen by KML but are not discussed. The reason for this is straightforward; there are sometimes failures that contain more than one failure mode, and without a root cause investigation, determining the singular cause is not metallurgically possible. In these instances, both failure modes were considered and taken into account. This resulted in a greater number of failure modes than there have been metallurgical failure analysis conducted by KML in the last decade, and the sum of greater than 100%. Nevertheless, the relative occurrence of these failure modes in industry, according to KML’s experience, is accurate, and so should provide insight into the types of failures that are most likely to cause trouble for you, our customers. Thank you for reading and be sure to stay tuned for the next installment in our series, “The Parts That Break: The Locations of Metallurgical Failure.”